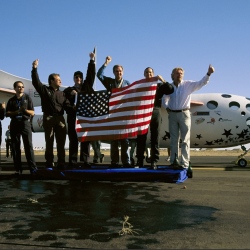 A new initiative from Virgin Galactic could soon see the space tourism company branch out into space haulage. Tipped to be called Virgin Galactic Cargo, the program could see WhiteKnightTwo aircraft carrying small satellites into low Earth orbit, before launching them into space via unmanned rocket.

The existence of the program was let slip by Stephen Attenborough, Virgin Galactic’s commercial director. "Virgin Galactic Cargo will follow soon, watch out for some potential announcements there in the not too distant future regarding small satellites," he said at the Royal Aeronautical Society’s third European space tourism conference on June 19. The "not too distant future" has been interpreted as July 11, when Virgin Group founder Richard Branson will give a press conference at Farnborough Air Show.

Speculation that Virgin Galactic Cargo would use WhiteKnightTwo (the carrier aircraft that launches Virgin Galactic’s SpaceShipTwo suborbital spaceplane) to put satellites into space stems from Virgin’s Galactic LauncherOne program, announced in July 2009, which aimed to do precisely that. That program was discontinued in October 2010.

Should Virgin Galactic Cargo follow the same blueprint, WhiteKnightTwo would be used to carry satellites up to 200 kg (440 pounds) for a fee between US$1 million and $2 million. Under questioning at the Royal Aeronautical Society Attenborough denied that this would be the case, but his reaction in conversation with Space.com indicates satellite payloads are still very much on the agenda.

"We’ve always had other applications in mind," he said. "We started to look at small satellite launchers a couple of years ago, we continued to do quite a lot of work on it and it is still an area we’re very interested in it and at some stage we’re making some announcements. I can’t say more than that."