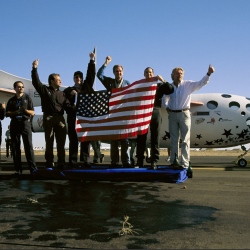 Virgin Galactic’s billionaire founder, Richard Branson, says his company is planning to fire up SpaceShipTwo’s rocket engine for the first time in flight on Monday — a "historic" blast that is expected to send the space plane supersonic.

"We’re hoping to break the sound barrier," Branson told the Las Vegas Sun. "That’s planned Monday. It will be a historic day. This is going to be Virgin Galactic’s year. We’ll break the sound barrier Monday, and from there, we build up through the rest of the year, finally going into space near the end of the year. I’ll be on the first official flight, which we look to have in the first quarter of next year. We’re doing a number of test flights into space first."