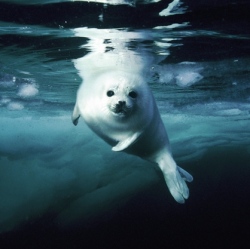 One of the giants of ocean science is about to get back in the water. Alvin, the famous US manned deep-submersible, is nearing the end of a major $41m refit.

It will go on a series of engineering test dives in the coming weeks before resuming research duties in May.

This remarkable vessel has notched up many firsts during its 49 years of service, not least the discovery of volcanic vents on the Pacific Ocean floor in 1977.

Before Alvin’s crew saw the vents’ extraordinary array of animals thriving in the mineral-rich, hot waters gushing up through cracks in the rock, everyone assumed all the deepest places in the oceans would be like deserts – there would be little or no life.

The sub’s observations transformed ideas about where and how life could exist, and not just on Earth. Alvin is currently sitting in a workshop at the Woods Hole Oceanographic Institution (WHOI) in Massachusetts.

Engineers are on a tight deadline to get the upgrades ready for sea trials that will be conducted off Bermuda in April. Assuming the US Navy certifies all her modifications as fit and ready, the submersible will then be despatched to the Caribbean to resume its science by making a number of descents to the Cayman Trough.

"The work we’ve been doing on her this past couple of years will give her a whole new lease of life," Kurt Uetz, the project manager for the sub’s upgrade, told BBC News.

The researchers who ride to the bottom in the "new" Alvin should notice a huge difference in the vehicle’s capabilities, and especially the conditions in which they themselves have to work.