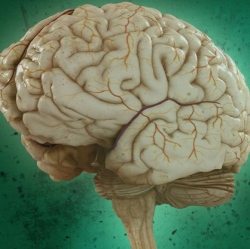 A new, ultrathin, ultraflexible implant loaded with sensors can record the electrical storm that erupts in the brain during a seizure with nearly 50-fold greater resolution than was previously possible. The level of detail could revolutionize epilepsy treatment by allowing for less invasive procedures to detect and treat seizures. It could also lead to a deeper understanding of brain function and result in brain-computer interfaces with unprecedented capacity.


Current technology has stalled out at a sensor array with about eight sensors per square centimeter; the new array—built in collaboration with John Rogers, a professor of materials science and engineering at the University of Illinois Urbana-Champaign—can fit 360 sensors in the same amount of space. To create a small device so densely packed with sensors, Rogers integrated electronics and silicon transistors into the array itself, drastically reducing the amount of wiring