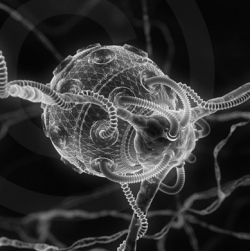 We’ve been hearing a lot lately about the possibility of treating medical conditions using nanobots – tiny robots that would be injected into a patient’s bloodstream, where they would proceed to travel to their targets, not unlike the microscopic submarine in the movie Fantastic Voyage … except nanobots wouldn’t be crewed by tiny shrunken-down humans. One challenge that still needs to be met, however, is figuring out a way of propelling the devices. Well, we may now be closer to a solution. Yesterday, development of a new type of nanoscale artificial muscle was announced, which works like the muscles in an elephant’s trunk. These could conceivably be used in nanobots, to whip them along using a rotating flagellum – a tiny sperm-like tail, in other words.