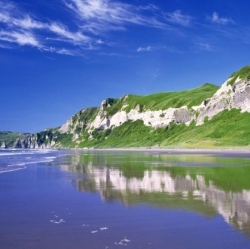 Nanoengineers at the University of California, San Diego have designed a new form of tiny motor that could be used to rid the sea of carbon dioxide pollution. The micromotors, described in a new study, would be powered by the environment itself, using enzymes to move around the sea, converting carbon dioxide into a solid as they swim.

"In the future, we could potentially use these micromotors as part of a water treatment system, like a water decarbonation plant," said Kevin Kaufmann, co-author of the study. The proof-of-concept micromotors use the flow of the water along with a catalyst, carbonic anhydrase, to rapidly convert carbon dioxide into calcium carbonate, which can then be stored.

Other solutions to the problem have been suggested, but many are highly expensive, use harsh chemicals or are energy consuming. The research team said their microbots would be more efficient, though in the experiments they were required to add hydrogen peroxide to the water, which reacted with platinum inside their casing to create oxygen and propel them forward, and whether that is sustainable across the entire ocean is obviously unclear. Platinum is also, unfortunately, expensive.

The robots are fast though, water with just two to four percent hydrogen peroxide allowed them to reach more than 100 micrometers per second. Researchers hope to rework the concept to use minerals that are more naturally abundant as a next stage in the development.