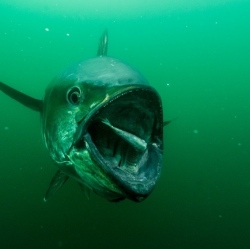 Rare minerals might not sound as exciting as sunken treasure to you, but to the mining industry those materials could be literally more valuable than gold. And there are few regulations in place yet to stop deep sea mining from destroying the seafloor. Right now the bottom of the ocean’s first line of defense is the International Seabed Authority.

They’ve been working on the issue since they were first formed by the 1982 United Nations Convention on the Law of the Sea, and they’ve been fighting an uphill (upstream?) battle ever since. It’s not for lack of action, they’ve enacted regulations and proposed recommendations, it’s for lack of knowledge. We’ve only explored a tiny percentage of the ocean and mapped little of the seafloor, so it’s difficult to know where mining is likely to take place or how it will affect the surrounding waters.

But goodness knows that’s not stopping anyone from exploring what’s down there. Recently a team of British scientists found a plethora of valuable minerals atop an underwater mountain called Tropic Seamount. It’s basically a huge flat-topped mound of some of the scarcest materials on Earth. This particular group was part of a research mission—and while they were expecting to find rare minerals, they didn’t anticipate quite so much of them. There’s the equivalent of one twelfth the world’s supply of tellurium down there, which is used in advanced solar panels, plus rare earth elements that go into electronics.

That makes deep sea deposits valuable, and the fact that it’s currently very expensive and time-consuming to mine them isn’t likely to stop everyone. And you know what they say: if you can’t stop ‘em, regulate ‘em. The million—or maybe billion—dollar question is: how?

Even people who have spent their lives exploring the ocean depths are unsure. Cindy Van Dover, who has ventured down in the submersible Alvin both as a pilot and as a lead scientist for the last several decades, explains that it’s hard to apply limited knowledge of certain sections of the seafloor to the entire thing.

“We know if they mine in some places they’re just going to rip up the seafloor, so to some extent we know that there’s some habitat destruction going on,” but she says, “There’s lots of unknowns. There are organisms that have very long lives. There are organisms that have very rapid reproduction that might seem resilient, but they live at hydrothermal vents so they’re really only endemic to small patch, and they’ll have to go find another patch.”

Without knowledge of how mining effects will accumulate over time, it’s challenging to create effective legislation.

We know what happens when we mine on land, so when authorities create terrestrial mining regulations they know exactly what to guard against. It’s not so easy in the ocean. But it’s vital that we act now. “Once they begin, it’s going to be like deep sea fishing, where it’s really difficult to manage,” says Van Dover. “I feel like we have this opportunity right now to get the regulations right.”

On the seafloor there are no disgruntled residents to complain about mining impacts. Fish and microscopic organisms can’t tell us they’re dying, they just do. Those living at deep sea vents and other major geological hubs, which are likely to be more enriched in precious minerals, might be especially vulnerable, since they don’t have large habitats. Plus, they’re out in international waters, where no country has the economic motivation to keep others in check. It’ll be up to the International Seabed Authority to keep everyone in line, that, and our innate desire to preserve nature. And that’s always worked well in the past…right?