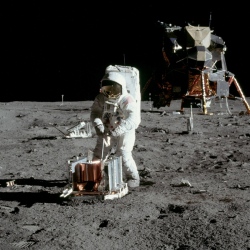 Progress in science right now is being held back by two key inefficiencies:

The time-lag problem: there is a time-lag of, on average, 12 months between finishing a paper, and it being published.
The single mode of publication problem: scientists share their ideas only via one format, the scientific paper, and don’t take advantage of the full range of media that the web makes possible.
The stakes are high. If these inefficiencies can be removed, science would accelerate tremendously. A faster science would lead to faster innovation in medicine and technology. Cancer could be cured 2-3 years sooner than it otherwise would be, which would save millions of lives.

The first major inefficiency is the time-lag problem for distributing scientific ideas. After you have written a scientific paper, it takes, on average, 12 months for the paper to be distributed to the global scientific community. During that time the paper is going through the peer review process, which takes an extremely long time.

If you read a paper, and have some thoughts about it, and write up a response, it is going to take 12 months for your response to be seen by the global scientific community.

Science is fundamentally a conversation between scientists around the world. Currently the intervals between iterations of that conversation are 12 months on average. This 12 month time-lag represents a huge amount of friction in the circulation of scientific ideas.

Imagine the slowdown on the web if every blog post, and every tweet, and every photo, was made available on the web 12 months after it was originally posted. Imagine if all the stories in your Facebook News Feed were 12 months old. People would be storming the steps of Congress, demanding change.

The time-lag in the distribution of scientific ideas is significantly holding back science. It’s critical for global progress that we work to remove this inefficiency.

The single mode of publication problem

Historically, if a scientist wants to make a contribution to the scientific body of knowledge, it has to be in the form of a scientific paper.

Blogging hasn’t taken off in science, because scientists don’t get credit for writing blog posts. You often hear a scientist saying ‘I’m not going to put these ideas in a blog post, because they are good enough for me to incorporate into a paper, which I’ll publish in the next couple of years’. Everyone loses out because of that delay of a couple of years.

Most people who share information on the web have taken advantage of the rich media that the web provides. People share information in all kinds of forms: videos, status updates, blog posts, blog comments, data sets, interactive graphs, and other forms.

By contrast, if a scientist wants to share some information on a protein that they are working on, they have to write a paper with a set of two dimensional black and white images of that protein. The norms don’t encourage the sharing of an interactive, full-color, 3 dimensional model of the protein, even if that would be a more suitable media format for the kind of knowledge that is being shared.

The future of science: instant distribution

Tim Berners-Lee invented the web in order to make it easier for him and his colleagues to share their research papers. The web has impacted science, but over the next few years, the web is going to entirely re-invent the way that scientists interact.

In 5-10 years’ time, the way scientists will communicate will be unrecognizable from the way that they have been communicating for the last 400 years, when the first academic journal was founded.

In a few years, scientists will look back and will struggle to believe that they used to exist in a world where it took 12 months to circulate a scientific idea around the world. Discussing the idea of 12 month distribution delays for ideas will produce the same confused look that it produces today, when one asks someone to conceive of 12 month distribution delays to tweets, blog posts, and general web content.

Instant distribution means bringing the time-lag for distributing a scientific paper around the world down to 1 day, or less. This speed-up will have a transformative effect on the rate of scientific progress in the world. Discoveries will be made much more quickly.

One of the reasons that technological progress in the 20th century was so much greater than growth in previous centuries is that there were so many powerful communication technologies invented in the 20th century that connected people around the globe: the telephone, the TV, the internet.

Bringing instant distribution to science will have a similarly transformative effect on scientific progress.