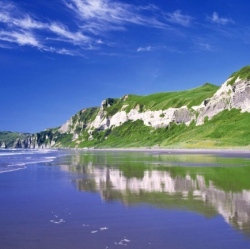 Carbon dioxide injected into a geothermal reservoir could be stored permanently by turning into rock. Capturing carbon dioxide and storing it underground could help address climate change, but some experts worry that the gas will leak back out. Research described in the journal Science points to a more secure way of storing it.

The scientists showed that when carbon dioxide is pumped along with water into certain types of underground formations, it reacts with the surrounding rock and forms minerals that could sequester the carbon dioxide for hundreds or thousands of years.

Last week, a major U.N. climate report called attention to the importance of carbon capture and storage technology (CCS) for dealing with climate change, and suggested that the cost of limiting warming to two degrees Celsius would greatly increase if CCS isn’t used. But the report also noted that concerns about leaks could slow or block large-scale use of the technology.

In the new work, researchers from University College London and the University of Iceland added carbon dioxide to a stream of water being pumped underground at a large geothermal power plant in Iceland, as part of normal plant operations. The carbon dioxide quickly dissolves in the water, and in that state it no longer has a tendency to rise to the surface.

Once underground, the carbon dioxide-laden water reacts with basalt, a type of volcanic rock. The researchers showed that, within a year, 80 percent of it had reacted with magnesium, calcium, and iron to form carbonate minerals such as limestone.