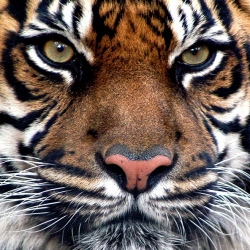 Most people can see a pretty wide range of colours – about a million hues, according to scientists.

We perceive all those gradations in colour using cells in our eyes called "cones". Most people have three cones, making us "trichromats". People with colour blindness have only two cones that function normally, so they’re called "dichromats".

Now, a scientist in Newcastle, England has apparently discovered a woman who can see 99 million more colours than the average person. Her ability to perceive all those colours is extremely rare.

She’s a tetrachromat, with four cone cells in her eyes, and she’s able to see many colours that haven’t even been named, since trichromats can’t perceive them.
Dr. Gabriele Jordan from Newcastle University has been searching for a tetrachromat for 20 years, and two years ago, she says she found her first one.
Although the woman (who hasn’t been named publicly – she’s a doctor living in northern England) is said to be the first tetrachromat discovered by scientists, experts believe there are others.

In the course of their search, Dr. Jordan’s team has found many other people with four cones in their eyes, but none of them passed the test for "super colour vision."
"We now know tetrachromacy exists," Dr. Jordan told Discover Magazine. "But we don’t know what allows someone to become functionally tetrachromatic, when most four-coned women aren’t."