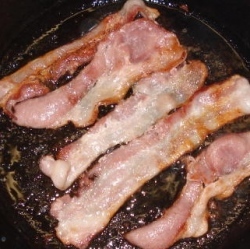 Red meat gives a boost to gut bugs that are bad news for your arteries. The discovery may explain why eating lots of meat increases the risk of heart disease.

Stanley Hazen at the Cleveland Clinic Lerner Research Institute in Ohio and colleagues fed mice a diet high in carnitine, a nutrient found in large amounts in red meat and also added to energy drinks. The team found that this increased the incidence of atherosclerosis, a thickening of the artery walls.

However, when the researchers fed the same diet to mice with suppressed gut flora, they saw no increase in atherosclerosis.

A similar effect appears to exist in humans. The team studied a group of people undergoing cardiac evaluation, and found that those who had higher levels of carnitine in their blood also had a higher incidence of previous cardiac problems.