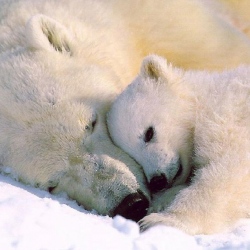 Polar bears rely on sea ice platforms to hunt their favored prey: ringed seals. When the ice breaks up due to warmer temperatures, polar bears retreat inland and fast until the ice refreezes in the fall.

The widespread loss of sea ice in the Arctic, along with changes in breakup and refreeze times, has already resulted in weakened polar bear populations, Derocher and colleagues note in the journal Conservation Letters. And these changes are expected to continue.

"Given the amount of inertia in the climate system, it is very clear that we are going to lose polar bear populations," Derocher said, citing research that indicates two-thirds of the bears will be gone by 2050, mostly at lower latitudes.

The question is how to manage this decline. If a so-called crisis year hits, should the starving bears be left to die or should money be spent (and if so, how much) trying to save them, hoping that the next year the sea ice will stay intact long enough for the bears to survive on their own?

Intervention feeding could keep some bear populations around for another 10 to 20 years, long enough to maintain vibrant polar bear tourism operations, as well as provide a source of subsistence food for Inuit populations, Derocher explained.