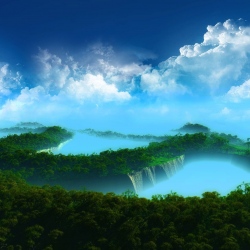 It might be easier than previously thought for a planet to overheat into the scorchingly uninhabitable “runaway greenhouse” stage, according to new research by astronomers at the University of Washington and the University of Victoria published July 28 in the journal Nature Geoscience.

In the runaway greenhouse stage, a planet absorbs more solar energy than it can give off to retain equilibrium. As a result, the world overheats, boiling its oceans and filling its atmosphere with steam, which leaves the planet glowing-hot and forever uninhabitable, as Venus is now.

One estimate of the inner edge of a star’s “habitable zone” is where the runaway greenhouse process begins. The habitable zone is that ring of space around a star that’s just right for water to remain in liquid form on an orbiting rocky planet’s surface, thus giving life a chance.

Revisiting this classic planetary science scenario with new computer modeling, the astronomers found a lower thermal radiation threshold for the runaway greenhouse process, meaning that stage may be easier to initiate than had been previously thought.

“The habitable zone becomes much narrower, in the sense that you can no longer get as close to the star as we thought before going into a runaway greenhouse,” said Tyler Robinson, a UW astronomy postdoctoral researcher and second author on the paper. The lead author is Colin Goldblatt of the University of Victoria.

Though further research is called for, the findings could lead to a recalibration of where the habitable zone begins and ends, with some planets having their candidacy as possible habitable worlds revoked.

“These worlds on the very edge got ‘pushed in,’ from our perspective — they are now beyond the runaway greenhouse threshold,” Robinson said.

Subsequent research, the astronomers say, is needed in part because their computer modeling was done in a “single-column, clear-sky model,” or a one-dimensional measure averaged around a planetary sphere that does not account for the atmospheric effect of clouds.