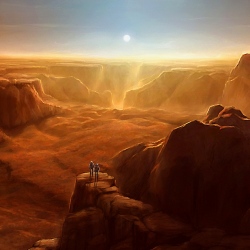 Russian engineers are fighting to save the country’s latest mission to Mars.

The Phobos-Grunt probe launched successfully but then failed to fire the engine to put it on the correct path to the Red Planet.

Russian space agency officials say the craft is currently stuck in an Earth orbit and that engineers have two weeks to correct the fault before the probe’s batteries run out.

The project is Russia’s most ambitious space venture in recent years.

It has been designed to collect rock and dust samples from Mars’ moon Phobos and bring them back for study in labs on Earth.

Scientists hope the dusty debris would provide fresh insights into the origin of the 27km-wide moon, which many scientists suspect may actually be a captured
asteroid.
The venture is also significant because it is carrying China’s first Mars satellite. Yinghuo-1 is riding piggyback on Phobos-Grunt.