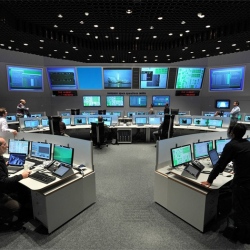 History was made today as a spacecraft the size of a fridge executed the first successful landing on a comet. The European Space Agency (ESA) confirms that at about 16:00 GMT the unmanned Philae space probe touched down on the surface of comet 67P/Churyumov-Gerasimenko at the landing site known as Agilkia.

The comet and spacecraft are 510 milion km (310 million miles) from Earth, so the news of the landing took 28 minutes and 20 seconds to reach mission control in Darmstadt, Germany. The day before the landing, the 100 kg (220 lb) Phiale was turned on and its batteries charged for the first time since leaving Earth. There were some initial glitches as the batteries warmed more slowly than anticipated, but the spacecraft soon warmed up to its operational temperature.

As the Rosetta mothership carrying Philae maneuvered into position, mission control carried out flight checks on the two spacecraft, sent command updates to Philae that allowed it to navigate autonomously to the landing site, and cleared the landing maneuver after a series of go/no decisions with the lander declared ready for separation at 02:35 GMT.

Despite a transient fault in the cold gas thruster aboard Philae, at 07:35 GMT Rosetta completed its final maneuver and the final permission was given to proceed with landing. At 09:03 Philae separated from Rosetta. During course correction maneuvers, communications with Earth were interrupted from either spacecraft, so they were programmed to operate autonomously.