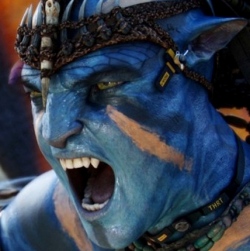 Soldiers practically inhabiting the mechanical bodies of androids, who will take the humans’ place on the battlefield. Or sophisticated tech that spots a powerful laser ray, then stops it from obliterating its target.

If you’ve got Danger Room’s taste in movies, you’ve probably seen both ideas on the big screen. Now Darpa, the Pentagon’s far-out research arm, wants to bring ‘em into the real world.

In the agency’s $2.8 billion budget for 2013, unveiled on Monday, they’ve allotted $7 million for a project titled “Avatar.” The project’s ultimate goal, not surprisingly, sounds a lot like the plot of the same-named (but much more expensive) flick.

According the agency, “the Avatar program will develop interfaces and algorithms to enable a soldier to effectively partner with a semi-autonomous bi-pedal machine and allow it to act as the soldier’s surrogate.”

These robots should be smart and agile enough to do the dirty work of war, Darpa notes. That includes the “room clearing, sentry control [and] combat casualty recovery.” And all at the bidding of their human partner.

Freaky? Um, yes. But the initiative does strike as the next logical step in Darpa’s robotics research. For one thing, the agency’s already been investigating increasingly autonomous, lifelike robots, including Petman (a headless humanoid), designed to mimic a soldier’s physiology, and AlphaDog (a gigantic, lumbering, four-legged beast), meant to lug gear during combat.

And just last week, when Darpa released a new video of AlphaDog cavorting through the forest, the agency noted that they wanted the ‘bot to “interact with [soldiers] in a natural way, similar to the way a trained animal and its handler interact.” AlphaDog is even being designed to follow a human commander using visual sensors, and respond to vocal commands.