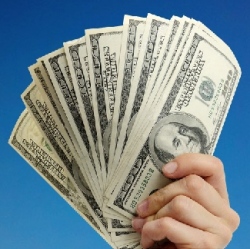 Just 34 minutes after launching on Kickstarter, Pebble’s new Pebble Time smartwatch has already secured over $1 million in pre-orders, easily clearing its original $500,000 goal. Kickstarter claims “Pebble is the fastest project to ever raise $1 million on Kickstarter.”

Today marks the unveiling of Pebble’s third smartwatch, “the Pebble Time, a $159 device with a handful of features brand-new to the Pebble line, like: a colorful e-paper display; an updated, notification-centric OS; a ’20 percent thinner’ design; and a Gorilla Glass screen.”

Pebble launched its first product on Kickstarter back in 2012 to much fanfare. By returning to the crowdfunding site with early success, Pebble proved that it can still drive demand as Apple’s Watch looms.

As of posting this, the smartwatch has raised over $6 Million on kickstarter, as it continues to break records with 31 days left to go.

Here is the link to the project’s kickstarter page: