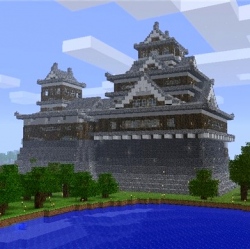 But it might need to improve its own game, as the filing misspells its target as "Mindcraft", and developer Markus "Notch" Persson has already vowed not to give in.

"Step 1: Wake up. Step 2: Check email. Step 3: See we’re being sued for patent infringement. Step 4: Smile," Notch wrote at Twitter. "Unfortunately for them, they’re suing us over a software patent. If needed, I will throw piles of money at making sure they don’t get a cent."

Filed in 2001 and awarded in 2005, Uniloc’s patent describes a system for "preventing unauthorized access to electronic data" which involves communication between a portable device and a license registration authority. Uniloc claims that this patent gives it rights to software that verifies licensing on the Android operating system.

Writes Uniloc: "Mojang is directly infringing one or more claims of the ’067 patent in this judicial district … by or through making, using, offering for sale, selling and/or importing Android based applications for use on cellular phones and/or tablet devices that require communication with a server to perform a license check to prevent the unauthorized use of said application, including, but not limited to, Mindcraft."

Notch, however, said that Minecraft does not perform license checks in the manner described by the patent–then took a jab at the whole idea of patented software, for good measure: "Software patents are plain evil. Innovation within software is basically free, and it’s growing incredibly rapid. Patents only slow it down."

Based in Luxembourg, Uniloc now markets itself as an intellectual property "incubation lab" specializing in computer security. It filed the lawsuit against Sweden’s Mojang in Tyler, Texas, a venue famous for favoring plaintiffs in patent infringement cases. Uniloc’s past targets include Microsoft, but it recently turned its attention to smaller beer, such as stock photography sites.