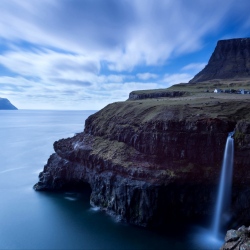 Sensory substitution devices work by converting one type of sensory input into another – examples would be systems such as CASBLiP and EYE 21, which allow the blind to “see” by assigning sounds to images. Now, a team of researchers at the Hebrew University of Jerusalem have created a similar wearable device, known as EyeMusic. It “employs pleasant musical scales to convey visual information,” and could one day help the visually impaired more easily perform tasks that the rest of us take for granted.

The device consists of a pair of glasses with an attached video camera, which are wired to a pair of headphones – those headphones transmit sound into the user’s scalp, as opposed to directly into their ears.

The camera makes scans of the scenery in front of the user, with each scan going from left to right. These scans are translated into “soundscapes,” which are short pieces of music played back through the headphones. The higher that a pixel is vertically located in the scanned image, the higher of a musical note will be used to represent it in the soundscape. The farther to the right that a pixel is within the scanned area, the later that it will be heard within the soundscape – an auditory cue marks the beginning of each scan/soundscape.

The brightness of each pixel is translated into how loud its sound is. Different colors are represented by different instruments, with blue becoming a trumpet, red a reggae organ, green a reed, yellow a violin, and white being heard as vocals. Black is represented by silence.

Although some of the sample soundscapes may sound rather … complex, a group of 18 blind-folded sighted test subjects reportedly learned to use EyeMusic relatively quickly – in some cases, less than half an hour. In a subsequent test, they were able to use the device to locate a white square displayed on a tablet computer.

Down the road, it is hoped that it could be used by the blind in everyday activities such as selecting produce at the grocery store, or even playing video games