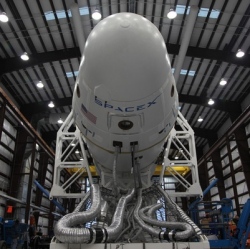 An audacious plan to send two people looping around Mars and back has a lot of crazy components–who will pay for it? Who will design and build the special rocket and spaceship for this mission? How can it possibly be ready in just five years? And who gets to go? And why?

So far, only that last question has an answer, and it’s the only non-crazy part of this new plan: Why not?

We first heard about the “Mission for America” last week, when the first details emerged about space tourist Dennis Tito’s Inspiration Mars program. Tito, who gained fame as the first person to pay for a round-trip ticket to the International Space Station, wants to send a two-person crew to Mars and back in 501 days, starting in 2018. The nonprofit company formed to further this goal held a press announcement Wednesday in Washington, presenting scarce new details but pretty good answers to the oft-repeated question of why. American pride is high on the list.
Someone asked Tito if he just waned to beat China to Mars, and he replied, “Wouldn’t I want to do that? Wouldn’t I want America to do that? Wouldn’t you want America to do that?”

Since the announcement, several space exploration luminaries–not the least of whom is Apollo 11 astronaut Buzz Aldrin–have lined up to lend moral support. “The purpose is to inspire, to say we’re going to do something and then we do it,” he told the Washington Post. A 6-year-old boy who reportedly said “this is my Apollo” has apparently made one of the first donations, worth $10.

The Mission for America has a tight schedule because it aims to take advantage of a rare alignment between Mars and Earth during the 2018 launch window. The trajectory is so carefully designed that the spacecraft wouldn’t need to fire its engines to get around Mars and back; instead it would just use the planet as a slingshot. It would gain immense speeds for the return leg and would need no de-orbit burn. But as we learned with Apollo 13, there’s a really tiny window for error.