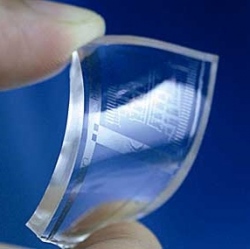 A field-effect transistor that may make graphene the next silicon has been developed by a University of Manchester team led by Nobel laureates Professor Andre Geim and Professor Konstantin Novoselov.

One of many potential applications of graphene is its use as the basic material for computer chips instead of silicon. This potential has alerted the attention of major chip manufactures, including IBM, Samsung, Texas Instruments and Intel. Individual transistors with very high frequencies (up to 300 GHz) have already been demonstrated by several groups worldwide.

Unfortunately, those transistors cannot be packed densely in a computer chip because they leak too much current, even in the most insulating state of graphene. This electric current would cause chips to melt within a fraction of a second.

The University of Manchester scientists are using graphene not laterally (in plane) — as all the previous studies did — but in the vertical direction, configuring graphene as a tunneling diode (an electrode from which electrons tunnelled through a dielectric into another metal).

Then they exploited a truly unique feature of graphene: that an external voltage can strongly change the energy gap of tunneling electrons. As a result they got a new type of a device: a vertical field-effect tunneling transistor in which graphene is a critical ingredient.