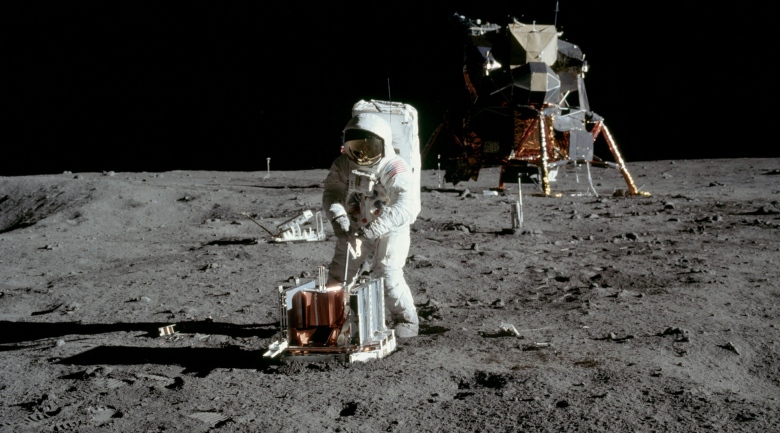 The Apollo program was the spaceflight effort carried out by the United States’ National Aeronautics and Space Administration (NASA), that landed the first humans on Earth’s Moon. Conceived during the Presidency of Dwight D. Eisenhower, Apollo began in earnest after President John F. Kennedy proposed the national goal of "landing a man on the Moon and returning him safely to the Earth" by the end of the 1960s in a May 25, 1961 address to Congress.

Kennedy’s goal was accomplished with the Apollo 11 mission when astronauts Neil Armstrong and Buzz Aldrin landed their Lunar Module (LM) on the Moon on July 20, 1969 and walked on its surface while Michael Collins remained in lunar orbit in the command spacecraft, and all three landed safely on Earth on July 24. Five subsequent Apollo missions also landed astronauts on the Moon, the last in December 1972. In these six spaceflights, 12 men walked on the Moon. These are the only times humans have landed on another celestial body.

Apollo ran from 1961 to 1972, following the Mercury and Gemini programs. It used Saturn family rockets as launch vehicles. Apollo / Saturn vehicles were also used for an Apollo Applications program which consisted of three Skylab space station missions in 1973–74, and a joint U.S.–Soviet mission in 1975.

Apollo was successful despite two major setbacks: the 1967 Apollo 1 cabin fire that killed the entire crew during a pre-launch test; and an in-flight failure on the 1970 Apollo 13 flight which disabled the command spacecraft’s propulsion and life support, forcing the crew to use the Lunar Module as a "lifeboat" for these functions until they could return to Earth safely.