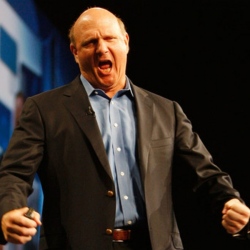 The family will be called the Surface, the same as its conceptually-cool-but-practically-impractical tabletop touch computer. It’s actually a very interesting product–the capabilities of a full PC, but thanks to Microsoft’s dual-natured, touch-focused Windows 8, it works like a regular tablet as well. Here’s what we know.

The first Surface Microsoft showed is a 10.6-inch tablet (the screen is Gorilla Glass, and is a 16:9 ratio, like laptop screens and Android tablets but unlike the iPad), a bit bigger than the 9.7-inch iPad, made of magnesium "liquid metal." This one, made for consumers and more mobile types, will run Windows RT. It’ll weigh 1.5 pounds, a little more than the new iPad’s 1.44, though at 9.3mm thick, it is a whopping zero-point-one millimeters thinner. It’s got a full-sized USB port, storage of either 32GB or 64GB, and one of the coolest things we’ve seen so far is the case. It’s got a built-in magnetic stand, like the iPad’s Smart Cover, but it also has a suuuuper thin keyboard with multitouch keys on it. The keyboard sounds kind of awesome! It has sensors so it can tell how much force you’re using on the keyboard, which lets you rest your fingers on it without triggering a key. Really cool! (If you want real, tactile keys, there’s another, slightly less thin cover that offers that.)

A second one, just shown, is for "professionals"–apparently it has a much more impressive spec list, "rivaling that of the best ultrabooks," and will use Windows 8 Professional. That means Ivy Bridge processors, USB 3.0, and a storage capacity of 64GB and 128GB. Unfortunately, it also means bigger and heavier–a 13.5mm thickness, and a 1.9-pound weight, which is pretty heft. It’s got stylus or pen input, surprisingly! But luckily it also has two separate sensors, so you don’t have to worry about your hand resting on the screen and registering–when it senses the pen, it’ll stop sensing your hand.

What’s curious is that Microsoft has long been reliant on hardware partners–HP, Dell, Lenovo, Acer, the list goes on probably forever–but in recent years, the company’s been getting just worked by Apple in the ultraportable area. Not talking about just the iPad; there’s also no real competitor to the MacBook Air, which is the whole reason for the "Ultrabook" movement/PR bonanza. The Surface looks like it might serve both those niches at once, and better than any of Microsoft’s partners (who, of course, could have made this–they just haven’t).

What about price and release date? Well, we have no idea. Microsoft said both models will be priced "to compete," which means probably in the same ballpark as the iPad’s prices. No word on mobile wireless (like 3G or 4G) yet. No word on release date.