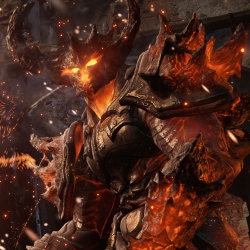 Epic’s been at E3 showing off its latest and greatest Unreal Engine 4. If this generation of games are anything to go by, we should see a tonne of games using UE4, and they’ll look awesome doing it too.

The whole thing looks like a pre-rendered scene, but Epic was showing off actual in-game engine graphics here, so this is the kind of glorious detail you can expect from the next generation of games. Apparently there are already a couple of UE4 games in development too, plus this whole shebang was running on a “personal computer” with just one graphics card. That alone should give us cheapskate PC gamers hope  that we won’t have to kit our rigs out £100s of new gear, just to play UE4 games.

If that wasn’t enough for you, check out the second walk-through video below showing you the ins and outs of the engine, and Kotaku’s high-resolution Unreal Engine 4 screenshot gallery.