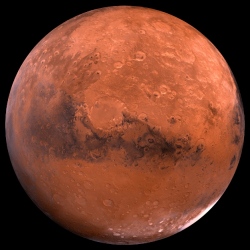 On the 10th anniversary of its launch, NASA’s Opportunity rover on Mars is also celebrating reaching the halfway point in its drive from one crater-rim segment to another.

The Opportunity rover, which is still going strong on the Red Planet long after its official mission was slated to end, is journeying 1.2 miles (2 kilometers) from the spot it studied for the past 22 months, on the edge of Mars’ Endeavour crater, to another area where it will begin a new phase in its research.

Sunday (July 7) marks the 10th anniversary of Opportunity’s launch from Earth with its sister rover Spirit, which shut down on Mars in 2010. The rovers lifted off in 2003, and arrived at the Red Planet in January 2004. They were originally expected to operate for three months.