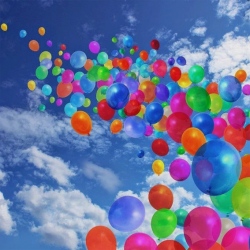 Even without having seen the movie Up, plenty of people will have looked at helium balloons and thought about using them to fly. Roner himself tells Gizmag that his motivation for carrying out the stunt was as simple as curiosity. "It’s something I’ve wanted to do for a long time," he says. "Who hasn’t thought of getting lifted off the ground by a bunch of helium balloons?" It was all the more reminiscent of the movie, however, due to the colorful balloons used.

A great deal of preparation was required for the project. Roner spoke to people who had done similar balloon flights before and used their advice and experience to inform his planning. Among the calculations that were done in advance of his flight, Roner and his team worked out how much helium would be required to to lift him off the ground, how high he would rise and how far would he might travel. A backup plan was also worked out in case anything went wrong.

The lounger was released from the cables holding it to the ground and Roner was lifted up by the balloons along with a shotgun for bursting them and a parachute to let him float back down.