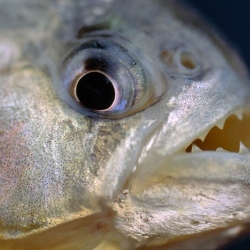 “Then I had to take the samples all the way across campus to the root lab to have them analyzed,” Hall says.

“It was easier to buy a good camera lens and take the photos myself and send the files to the lab.”

By placing the root on a moveable platform beneath the laser, Hall could incrementally vaporize sections of the root, leaving a series of clear surface images, which could be combined with software to make a 3D rendering of the interior and exterior of the sample.

The laser tomography method** is novel in that it provides high contrast, full color images without the use of contrast enhancing agents.

This allows researchers to see nuanced compositional differences in their samples they would not be able to see otherwise.

Additional benefits of the laser tomography method are its speed, on the order of minutes, and that in most cases no preparation is required for the small biological specimens studied.