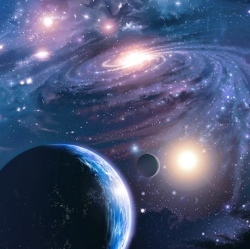 he idea that our universe is embedded in a broader multidimensional space has captured the imagination of scientists and the general population alike.

This notion is not entirely science fiction. According to some theories, our cosmos may exist in parallel with other universes in other sets of dimensions. Cosmologists call these universes braneworlds. And among that many prospects that this raises is the idea that things from our Universe might somehow end up in another.

A couple of years ago, Michael Sarrazin at the University of Namur in Belgium and a few others showed how matter might make the leap in the presence of large magnetic potentials. That provided a theoretical basis for real matter swapping.

Today, Sarrazin and a few pals say that our galaxy might produce a magnetic potential large enough to make this happen for real. If so, we ought to be able to observe matter leaping back and forth between universes in the lab. In fact, such observations might already have been made in certain experiments.

The experiments in question involve trapping ultracold neutrons in bottles at places like the Institut Laue Langevin in Grenoble, France, and the Saint Petersburg Institute of Nuclear Physics. Ultracold neutrons move so slowly that it is possible to trap them using ‘bottles’ made of magnetic fields, ordinary matter and even gravity.