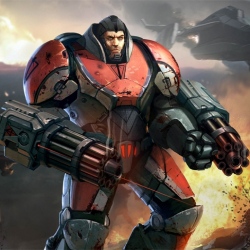 Up to 2,000 players at once will be able to do battle in PlanetSide 2. Two thousand. Yes, Sony Online Entertainment’s PlanetSide sequel puts the massive in MMOFPS, but it wasn’t until I spoke with Creative Director Matt Higby that I recognized just how big SOE is trying to make PlanetSide 2. With its deep strategy elements, its free-to-play model, its controls, its endless customization options, all on an all-new game engine built to take advantage of modern PC hardware, PlanetSide 2 looks big in every way. Heck, even its mobile app looks like it could blow its competitors out of the water. Is it any wonder PlanetSide 2 blew our minds at E3?

One of the first things I noticed about Higby’s San Diego office was his canine buddy chewing on a T-shirt emblazoned with the Vanu Sovereignty logo. The next thing I noticed is the full flight-stick setup on Higby’s gaming desk, complete with foot pedals. Imagine my delight when Higby revealed he was using the controller setup to play PlanetSide 2.

In the original PlanetSide, flight has a barebones, floating-camera feeling to it. Anyone can hop into a Mosquito or Galaxy and instantly become a successful pilot. In PlanetSide 2, flying has been reworked from the ground up. I had the chance to sample PlanetSide 2’s flight at E3, and I’d describe it as a mix of jet and helicopter flight from Battlefield and Arma 2. I crashed. A lot. Like in Battlefield 3, vehicles now give the sensation they have true mass, and if you’re not managing the throttle and hover controls, your plane will drop like a stone. Until you learn what you’re doing and get a feel for it, it’s straight-up hard.

Yes, a career. Because of the variety of gameplay options available through upgrades — options that will allow pilots to customize their aircraft with speed for scouting, heavy armor for troop transport, bombs for air-to-ground attacks, missiles for dogfighting, and much more — there’s enough depth there to keep most players busy for a long time. Yet flying is just one piece of the PlanetSide 2 experience (and for many players a minor one), but the skill, depth, and variety SOE has planned is a good example of its ambition level. And oh yeah, flight-stick controls are confirmed.