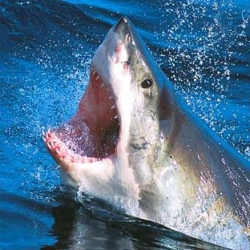 Using a new technique to age the tissues of these impressive creatures, scientists have identified a male great white that lived into its 70s. The researchers say the finding has important implications for the animals’ protection. Knowing the longevity of a species, how fast it grows and when it reaches sexual maturity is vital information for designing conservation programmes.

"These creatures are amazing and it’s fascinating to study them," said Li Ling Hamady, who is part of a joint programme between MIT and the Woods Hole Oceanographic Institution in the US.

"Everyone thinks they know these animals so well, and the public perception is that they’re either loved or hated. But in terms of the science, we’re only just now beginning to understand what they eat, where they go and how long they live," she told BBC News.

Scientists have tried to age the spectacular predators by counting annual growth rings in their tissues, such as in their vertebrae. But the sharks’ cartilage skeleton makes the division between these rings hard to discern even under the microscope.

Now, Ms Hamady and colleagues tell the journal Plos One that they made these rings easier to read by looking for a known radioactive marker.

This is a type, or isotope, of carbon atom that was produced in the fallout from the atmospheric nuclear bomb tests in the 1950s and 1960s.

It would have gone into the ocean and been incorporated into the tissues of marine animals living through that period. The scientists used the easy-to-detect radioactive carbon as a kind of date stamp to help them count and calibrate the growth layers better and thus determine the age of their test samples.