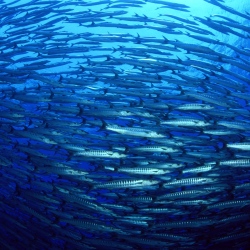 "Imagine opening a hatch in a submarine under water. The water will flow into the submarine with enormous force. It is precisely this energy potential we want to utilize." This is how German engineer Rainer Schramm describes his idea for storing energy under the sea. By using surplus energy to pump water out of a tank at the seabed, the water is simply let back in again when there’s an energy shortfall, driving turbines as it rushes in. The deeper the tank, the more power is generated.

The technology is being developed by Schramm’s company, Subhydro AS. Based in Olso, Norway for access to deeper water, the company claims to be the "first in the world to apply a specific patent-pending technology to make this possible." In fact the energy storage principle is identical to MIT’s underwater hollow concrete spheres which could store surplus energy from offshore wind turbines. Subhydro also positions its tanks as a logical counterpart to offshore wind, but like MIT’s technology, it could also be used to store energy from the grid.

Really, the idea is very similar to that behind above-ground pumped-storage hydroelectric power stations which pump water from a low reservoir to a high one when energy is cheap or plentiful, and allow it to flow back down through turbines when more energy is required. As with this new underwater technology, less energy is gained from the drop than is used to create the store of potential. The idea is simply to have potential energy reserved for when it’s needed – half-time of major televised sporting events being a classic example. Schramm calculates the "round-trip" efficiency of the system to be 80 percent, which is in the same ballpark as conventional pumped-storage hydro.