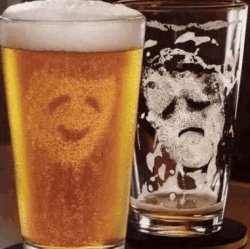 Drinking alcohol may enhance a person’s problem solving skills, according to a new study.

Scientists found that men who either drank two pints of beer or two glasses of wine before solving brain teasers not only got more questions right, they also were quicker in delivering correct answers, compared to men who answered the questions sober.

While the latest findings go against the traditional beliefs that alcohol impairs analytical thinking and rational thoughts, lead author Professor Jennifer Wiley of the University of Illinois at Chicago discovered that alcohol may enhance creativity problem solving by reducing the mind’s working memory capacity, which is the ability to concentrate on something in particular.

“Working memory capacity is considered the ability to control one’s attention,” Wiley told the Federation of Associations in Behavioral and Brain Sciences (FABBS). “It’s the ability to remember one thing while you’re thinking about something else.”

Researcher from the current study published in the journal Consciousness and Cognition also found that people who drank alcohol and had a blood alcohol level of 0.07 or higher were worse at completing problems that required attentional control but better at creative problem solving tests.

However, the surprising discovery was that participants with a BAC of 0.07 or higher solved 40 percent more problems than their sober counterparts and took 12 seconds to complete the tasks compared to 15.5 seconds by teetotal participants.

Wiley said that the key finding was that being too focused can blind a person to novel possibilities and a broader, more flexible state of attention may be helpful for creative solutions to emerge.

“We have this assumption, that being able to focus on one part of a problem or having a lot of expertise is better for problem solving,” Wiley said. “But that’s not necessarily true. Innovation may happen when people are not so focused. Sometimes it’s good to be distracted.”

Wiley noted that the findings only apply to people who had only a few drinks and not when people drink to extremes.

“The bottom line is that we think being too focused can blind you to novel possibilities, and a broader, more flexible state of attention is needed for creative solutions to emerge,”

Other experts said while the findings were interesting and made sense, they stressed that sleep is probably just as beneficial for enhancing creativity.  Past research showed that people who were allowed to sleep after being given a problem were also more likely to come up with a creative solution compared to those who stayed awake.