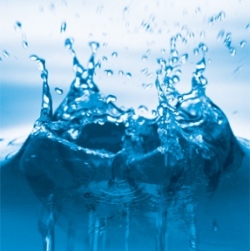 Disney Research, which previously came up with the SideBySide wall-based gaming concept, is back with what looks like a fairly sophisticated touch-sensing technology. The system, called Touché, works by detecting a range of frequencies at the same time, rather than one frequency as on simple capacitive screens. Using this range, the sensors can detect not only multitouch gestures on ordinary screens, but also distinguish between different objects or parts of the body or add touch to nontraditional surfaces, like liquids.

The demo video below is fairly impressive: it shows the wide range of gestures that the sensors can pick up (including grasping hands together and submerging your palm underwater.) Disney hasn’t said what it plans to do with the technology besides outlining a goal of creating invisible or "disappearing" computing, but the video shows a few possible examples, like controlling a music player with tapping gestures. Be sure to check out 2:55, in which you can teach your child to eat cereal with a liquid sensor and alarming noises