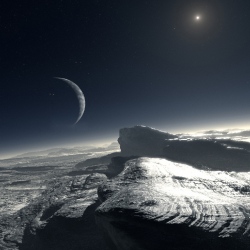 Pluto may not be a planet any more, but the discovery of its fifth moon means it can boast more satellites than the inner four planets combined. The finding could reignite the debate over the icy rock’s planetary status – or lack of. The find also suggests that the neighbourhood surrounding Pluto may be extremely dusty, which is bad news for those trying to a plot a safe course for spacecraft.

The new moon, which showed up as a tiny speck in images taken by the Hubble Space Telescope, is 10 to 25 kilometres across and has the temporary name of P5. It travels around Pluto in a 95,000-kilometre-wide orbit in the same plane as the other moons in the dwarf planet’s entourage – Charon, a 1200-kilometre-wide beast of a moon, and the more diminutive Nix and Hydra.

Mark Showalter from the SETI Institute in Mountain View, California and colleagues have been using images of Pluto’s lunar system to search for potential hazards that could damage NASA’s New Horizons spacecraft. The craft is already on its way to the outer reaches of the solar system and is scheduled to make a high speed fly-by of Pluto in 2015, when it will capture the most detailed photos of the system ever taken.

Last year, the team spotted a fourth moon in Hubble’s data, still known as P4. "When we discovered P4, the light bulbs went off in our heads," says Hal Weaver, a member of the team based at the Johns Hopkins University Applied Physics Laboratory in Laurel, Maryland. Until the discovery of P4, they had not worried about dust near Pluto affecting the spacecraft because there was no evidence to suggest that small impacts could release it from the surface of Pluto or Charon. But the discovery of so many small moons changes this. "It tells us that there must be lots of small particles lurking unseen in the Pluto system," Weaver says. "New Horizons will be flying at almost 14 kilometres per second, so even a 1-millimetre particle could destroy it," he adds.