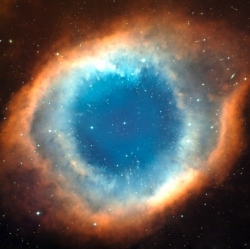 One of the difficulties in astrophysics has been a way to accurately determine the age of a star. New stars are obvious from their location in "star nurseries" of gas and dust, and "adult" stars can be roughly characterized through various methods, including a calculation based on their mass and luminosity. Unfortunately, these methods are approximations at best.

Researchers at KU Leuven’s Institute for Astronomy have now discovered a way to distinguish young stars from older ones by measuring the acoustic waves that they emit using ultrasound technology. The result of the accretion of shrinking clouds of gas and dust particles, a star evolves from "newborn" to "adolescent" as growing gravitational forces cause it to contract.

As these forces continue, the star becomes smaller, denser, and hotter until the core temperature is great enough to trigger thermonuclear fusion. Once this stage has been reached, and the star has stabilized in its size and fusion energy production over a very long period of time, it is classed as an "adult" and generally remains in this state for many billions of years.

As a general rule, as an adult star ages it becomes brighter. This means it is possible to approximate the ages of these stars using a calculation based on their mass and luminosity. This method works particularly well for stellar objects in their main sequence, where they are stable, adult stars falling within a particular range of mass, color, and luminosity.