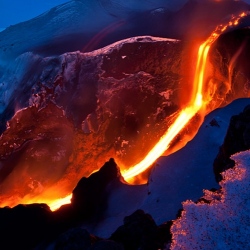 We’ve known for over half a century that the Earth is 4.5 billion years old, but for people like University of California, Davis geologist Qing-zhu Yin, that number just isn’t good enough–they need to determine what digit comes after the ‘5’. Yin has spent the last fifteen years trying to figure out exactly how our solar system formed–how, over a span of some tens of millions of years, a large chaotic disc of dust and gas turned itself into eight planets in orderly orbit around a central star.

Scientists have come up with a couple versions of the story: in one version, Earth emerged from an era of meteoric collisions so intense that the entire planet was, at first, a spherical sea of magma. In another version, the process was more drawn out–Earth was a rocky mini-planet where, every ten million years or so, something the size of Mars slammed into it and stuck, until finally all the Mars-size objects had either collided or–in the case of Mars itself–settled into an orbit of its own. But in order to figure out which version of the story is right, they need to know how long the era of ultra-violent planetary collisions lasted, down to a precision of tens of millions of years; in other words, they need to resolve the history of Earth to one more decimal point.

The secret to Earth’s exact age lies in the planet’s oldest rocks. Scientists can calculate an approximate age of those rocks by measuring the amount of two isotopes, uranium-238 and lead-206 the rocks contain. Because uranium-238 decays into lead-206 at a predictable rate, the ratio between the two isotopes tells scientists about how long the rocks have been around. But there’s a catch: in order to figure out what the relative proportion really tells us, scientists have to know exactly how much of each there was to start with. And in order to figure that out, they have to know how much uranium-238 and lead-206 there is, not just in the rocks at Earth’s surface, but also in the underlying mantle and–here’s the tricky part–in the totally unreachable, irreproducible core.