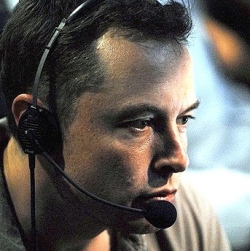 In a blog post, Musk, the chief executive of electric car maker Tesla Motors Inc described in detail a system that, if successful, would do nothing short of revolutionizing intercity transportation. But first the plan would have to overcome questions about its safety and financing.

The Hyperloop, which Musk previously described as a cross between a Concorde, rail gun and air-hockey table, would cost an estimated $6 billion to build and construction would take 7 to 10 years. Eventually, according to the plan, it would jettison more than 7 million people a year along one of the U.S. West Coast’s busiest traffic corridors.

As many as 28 passengers could ride in each pod and the system could even transport vehicles, according to the 57-page design plan.

Musk, who in the past has hinted at the hopes of building such a system, proposed the Hyperloop as an alternative to a $68 billion high-speed rail project that’s a major priority of California Governor Jerry Brown. It would be safer, faster, less expensive and more convenient, Musk said in the blog post.

But not everyone is convinced the project is a good idea.

Jim Powell, a co-inventor of the bullet train and director of Maglev 2000, which develops high-speed transport systems using magnetic levitation, said the system would be highly vulnerable to a terrorist attack or accident.

"The biggest overall problem is the idea of the low pressure tube from a terrorist standpoint," he told Reuters after taking an initial look at Musk’s specifications. "All a terrorist driving along the highway has to do is pull over, toss a net of explosives at it, and then everyone in the tube dies," he said.

Musk said that since the tube will be low- but not zero-pressure, standard air pumps could easily overcome an air leak. He also said the transport pods could handle variable air densities.

Musk may also have neglected to factor in a few costs. Powell said that since an extensive monitoring system would be needed to keep track of the tube’s pressure, the cost of the project could double Musk’s estimate, coming closer to $12 billion.