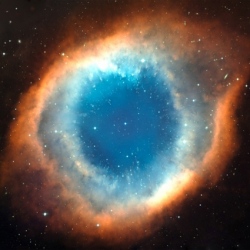 The telescope system also could point toward Earth and image objects as small as a rabbit, giving it the ability to hunt for lost campers in the mountains, he said.

The Aragoscope could provide images up to 1,000 times sharper than the Hubble Space Telescope.  A conventional space telescope is pointed at an opaque disk along an axis to a distant target. The disk boosts the resolution of the system with no loss of collecting area. It can be used to achieve the diffraction limit based on the size of the low cost disk, rather than the high cost telescope mirror. One can envision affordable telescopes that could provide 7 centimeter resolution of the ground from geosynchronous orbit or images of the sky with one thousand times the resolution of the Hubble Space Telescope.

“Quite frankly, our New Worlds starshade project overlaps with the architecture we want to use for the Aragoscope, so we feel we are in pretty good shape going into Phase Two,” said Cash. The Aragoscope would be parked in a geostationary orbit 25,000 miles high that follows Earth’s rotation, making it appear motionless from the ground. “Traditionally, space telescopes have essentially been monolithic pieces of glass like the Hubble Space Telescope,” said CU-Boulder doctoral student Anthony Harness of the Department of Astrophysical and Planetary Sciences, who is working with Cash on the project. “But the heavier the space telescope, the more expensive the cost of the launch. We have found a way to solve that problem by putting large, lightweight optics into space that offer a much higher resolution and lower cost.”

The opaque space disk would be made of a strong, dark, plastic-like material (think Hefty Bag) that could be launched in a compressed fashion like a parachute, then unfurled in orbit. The space shield would be tethered to the telescope at distances from tens to hundreds of miles depending on the size of the disk, said Harness. “The opaque disk of the Aragoscope works in a similar way to a basic lens,” said Harness. “The light diffracted around the edge of the circular disk travels the same path length to the center and comes into focus as an image.” Since image resolution increases with telescope diameter, being able to launch such a large, yet lightweight disk would allow astronomers to achieve higher-resolution images than with smaller, traditional space telescopes, he said.