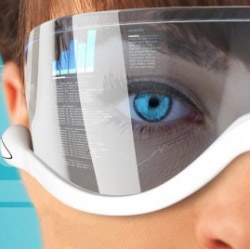 An Apple patent published yesterday by the USPTO and unearthed by Patently Apple is a reminder that Apple was actually working on wearable tech in the form of content-delivery glasses, at least on paper, long before Google debuted Google Glass. Apple originally filed a patent for its own Glass Project back in 2006, and this latest patent sketches out the details for a device that could someday go head-to-head with similar offerings from both Google and Microsoft.

In the new patent, Apple describes a “portable presentation device” which could be any device that a user wears that also provides them with access to visual or audio media content. It’s a fairly broad description, and I think that’s the intent: Apple has always had a habit of patenting ideas first, and worrying about bringing them to market later. That’s why the company is in such a strong position with regards to smartphone patents, despite actually being a relatively late entrant to the market vs. other cell phone makers.