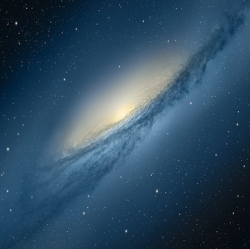 “It’s hard to believe that a supermassive black hole weighing millions of times the mass of the sun could be moved at all, let alone kicked out of a galaxy at enormous speed,” said study leader Francesca Civano in a press release. “But these new data support the idea that gravitational waves — ripples in the fabric of space first predicted by Albert Einstein but never detected directly — can exert an extremely powerful force.”

The ejection of the black hole actually took place about 4 billion years ago, as astronomers observe the radiation from galaxy CID-42, which is 4 billion light years from Earth. Astronomers reviewing data from the Hubble Telescope first noticed something interesting was going on. The visual data was then confirmed by telescopes on the ground.

“The previous data told us that there was something special going on, but we couldn’t tell if there were two black holes or just one,” said study co-author Martin Elvis. “We needed new X-ray data to separate the sources.”

That’s when they turned to the Chandra X-Ray Observatory, which was directed at the center of the visual data. The X-ray sources were reviewed with the telescope’s high-resolution camera to separate the two X-ray sources – the first being the black hole, and the second being the star cluster it left behind.