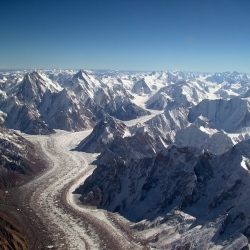 Well, that was unexpected. Google’s Sergey Brin just stepped on stage at Moscone West to deliver a demo of Google Glass, and it involves a Google+ hangout conducted via their connected eyewear. Oh, and some guys just jumped out of a zeppelin.

“Being able to share what you’re seeing is amazing,” Brin said. Four skydivers all equipped with Google Glass hardware just plummeted toward the ground in San Francisco, and video quality in the hangout as about as good as one would expect considering the circumstances. In fact, the hardware may have changed a bit since early demos, as the video seems considerably clearer than the infamous trampoline video that made the rounds a few weeks back.

To emphasize how cool the concept of seamless video sharing is, a small crew of bikers performed a few flips off of a carefully-placed mount, and two people took the Glass on a ride as they ran down the side of the Moscone Center.

The current iteration of Glass hardware obviously has a camera and microphone capable of recording video and audio, and it also sports a touchpad for navigation along its right side (though that hasn’t really been a secret). To keep users abreast of their surroundings, it also packs gyroscope, accelerometers, and a handful of other sensors.

Glass’s lead designer feels that “Glass as a whole is meant to be close to your senses, not block them,” which prompted her and the team to mount the display slightly above users’ eyes instead of directly in front of them. They also focused on making the device both physically and visually light, so as not to impact either a user’s comfort or their sense of style. All of the components were shifted to one side, which allowed Google to design different form factor for their Glass frames — some of which we may have seen before.

One of Google’s big plans for Glass was to help users capture and share the world as they see it, but that’s clearly not all. As we’ve seen in the concept video, it’s also about facilitating communication and putting more information — think navigation information, or a user’s current speed. The possibilities are certainly “incredible,” but why is Google showing it off? According to Brin, it was because of three things — Google thought it was amazing (it is), it’s very visually striking, and because they wanted to appeal to the developer community. As such, U.S. based developers will be able to pre-order a beta build only at I/O, for the low, low price of $1500